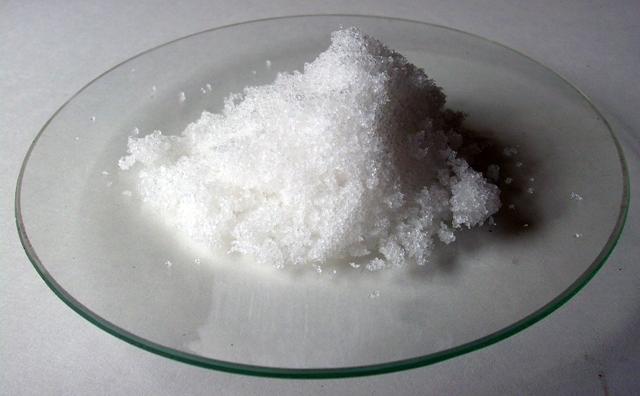 Sodium nitrite is the inorganic compound with the chemical formula NaNO2. It is a white to slightly yellowish crystalline powder that is very soluble in water and is hygroscopic. It is a useful precursor to a variety of organic compounds, such as pharmaceuticals, dyes, and pesticides, but it is probably best known as a food additive to prevent botulism.

The main use of sodium nitrite is for the industrial production of organonitrogen compounds. It is a reagent for conversion of amines into diazo compounds, which are key precursors to many dyes, such as diazo dyes. Nitroso compounds are produced from nitrites. These are used in the rubber industry.

It is used in a variety of metallurgical applications, for phosphatizing and detinning.[citation needed]

Sodium nitrite is an effective corrosion inhibitor and is used as an additive in industrial greases, as an aqueous solution in closed loop cooling systems, and in a molten state as a heat transfer medium.

Sodium nitrite is well known for its role in inhibiting the growth of Clostridium botulinum spores in refrigerated meats. The mechanism for this activity results from the inhibition of iron-sulfur clusters essential to energy metabolism of Clostridium botulinum. However, sodium nitrite has had varying degrees of effectiveness for controlling growth of other spoilage or disease causing microorganisms. Even though the inhibitory mechanisms for sodium nitrite are not well known, its effectiveness depends on several factors including residual nitrite level, pH, salt concentration, reductants present and iron content.Furthermore, the type of bacteria also affects sodium nitrites effectiveness. It is generally agreed upon that sodium nitrite is not considered effective for controlling gram-negative enteric pathogens such as Salmonella and Escherichia coli.